Jesus gave the highest importance to the Word of God. It is for this reason that Christians all over the world should consider the Word as the only standard to understand, teach and worship God. The Word is the truth about the Father, Christ, the Spirit and heaven. It came from God and whatever is said in it is true and holy. God cannot deviate from it. It is the power of God and so, Jesus gave the highest importance to it. It is able to perform everything God has desired. In fact, God works through it alone. In other words, without revealing a matter through His Word He does not work. A person is saved, led and blessed by the Word. Judgment too is rendered by the Word. God gave the Word so that He could achieve His purpose. And Jesus said, “Now the parable is this: the seed is the word of God” (Luke 8:11).

Jesus often spoke in parables to the crowd, but their meaning He revealed only to His disciples. While speaking of the seed that fell on four different surfaces, He referred to it as the Word. The surfaces represent the hearts of people. When God sent Christ to earth, He intended to achieve something great through Him, i.e. to have many sons to Himself. This is to say that He intended to save as many as possible from eternal damnation. Christ came to plant the Word in the hearts of men and continues to do so through His servants. The Word planted in us, when fully accepted, yields great results. Anything joined to it, such as complacency, rejection, worries of the world and selfish ambitions, does not allow our hearts to feed on it for maximum results. Christ plants the Word in us that we bring glory to God. This means our aim should always be to obtain His Word. He does not plant the Word once, but plants it throughout our life that we respond to His call to behave, work, believe and obey. When He plants it in us for the first time, it is for salvation; since then it is for an intimate relationship with God. And if we accept His Word each time He plants, we do not disappoint Him. Based on the history of our obedience He chooses to further plant it in us. The less we obey Him, the little opportunity He has to develop us in His kingdom.

When Jesus calls us to perform God’s will, He plants in us the Word relating to it. The way we respond to His call determines the kind of heart we possess. Hence, it is utterly important that we read the Word as often as possible, even daily. This does not mean He reveals God’s will to us every day, but by reading the Word we build intimacy with Him and at the right time He plants God’s will in us. Reading the Word teaches us to live godly. Many Christians fail to think that Jesus indeed works in this manner. It is because they do not believe or they were not taught to believe in it. However, when Jesus spoke the Word to the disciples, they believed. They believed that He is the One that would indicate to them their course. They listened to Him daily and when the time came for them to perform His will they were fully prepared. So, Jesus also being confident of their obedience gave them instructions. “Gathering them together, He commanded them not to leave Jerusalem, but to wait for what the Father had promised, ‘Which,’ He said, ‘you heard of from Me’” (Acts 1:4).

Two things happen when we daily delve into the Word. First, we learn to obey God, since we are willing to believe. Second, God rejoices in our obedience and lets Christ work with us. Christ plants the Word in us beginning from the things that relate to holiness. Unless and until we are in sanctification, He cannot delegate God’s will to us. Look at what the disciples achieved. First of all, they were prepared for it. But He did not leave them with whatever they learned from Him. He further gave them the Word that guaranteed the Holy Spirit from the Father. Because they fed on His every Word, they yielded a hundred fold for God. God has everything prepared for us in Christ. And, they are in the Word. All we must do is delve into it. He will reveal them to us. The entire course for our life on earth is planned and hidden in the Word. By following it we make wise choices, have truthful desires and as an upshot, become an example to many for a successful and yet, godly life.

Once the disciples made it their aim to follow the Word planted in them they knew they would have no need to look back. As Paul said of himself they too left what lied behind and reached forward to what lied ahead. They rejoiced in Christ throughout the days of their life. In pains, sorrows, fears and weaknesses they had peace. Christ made sure in God that the Word planted in them was in the power of the Spirit. Many times we fail to consider the Word as our refuge and a barricade to the enemy, because we give more consideration to the feelings of the flesh. The flesh beckons us to act in haste and we fall for it. But if we can bear in mind the power that lives in the Word, there’s no telling of how much joy we finally see. There will always be time for us to allow Christ to plant the Word in us. We just have to believe that since He saved us from eternal death, He is also able to save us from all worries and dangers. I tell you of an advantage of reading the Word every day. It gives us a sense of calmness in life. We will not easily be stirred by circumstances, people or Satan for hasty decisions. We discern the thoughts that come to our mind, discern the words of men and the reasons for facing certain situations. This is because we have understood the mind of God toward His children. Our courage that Christ will lead us will be abounding. Still, there is another advantage in reading the Word. Christ plants His thoughts and ways in us that in sudden times we know exactly how to act and react. 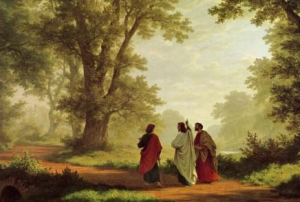 Let us decipher the idea behind the will of God and what it means by Christ revealing it to us from His Word. We know Paul as a man called by Christ for His service. So, he goes on to say in the Spirit, “Paul, called as an apostle of Jesus Christ by the will of God, and Sosthenes our brother” (1 Cor. 1:1). He became a great asset to God for His kingdom. But the key to his transformation into a person God desired is in the words “by the will of God.” God had a purpose for him. We know of his conversion on the road to Damascus: A bright light shone on him; he was blinded and heard a voice from the Lord calling him to His service. The will of God to him was the Word Christ spoke. For this reason also, God gave to us the Word in full in written form. In the days when there was no written Word Christ appeared to Paul in the Spirit by the will of God. Now, in the presence of the written Word, He appears to us in the Word and through the Spirit by the will of God. In fact, we are at a greater advantage now in that as many times as we read the Word He communicates with us. God has poured out His Spirit upon the believers that they are privileged for it. Nevertheless, none of the above takes shape when reading the Word is neglected.

So, first things first: believe in the Word read and believe in the gospel proclaimed, but “not paying attention to Jewish myths and commandments of men who turn away from the truth” (Tit. 1:14). For many have not only gone astray from the truth, but still many others calling themselves as the people of Christ established for themselves churches that do not carry either the truth or the Spirit of Christ. They go on into inventions about the working nature of the God in Christ. They formulated, using the Word, principles for themselves that do not fit Christ, God’s desire and heaven. If some say it is needless for Christ to speak from the Word and in the Spirit, examine their words with the Word. You will see their falsity. For they often contradict their own words and the promises of God. Pray for such people and most importantly, pray that they do not gain influence over you by their maligning the truth. They have allowed sin to rule their hearts and her fate is as follows. “Then one of the seven angels who had the seven bowls came and spoke with me, saying, ‘Come here, I will show you the judgment of the great harlot who sits on many waters’” (Rev. 17:1).

The sin that sits on many people orchestrating them to walk against God will be judged; and so, on whom she sits. If Jesus does not communicate with us, if He does not set the course of our life, if he does not reveal that course by planting His Word in us, then all of us are doomed to eternal death. But He called us with the Word to save us from sin and death, and we know it to be true. So, there is no reason to believe He would not lead us to the end. The greatest proof that He continues to plant the Word in us is the fruit we yield. We yield the fruit that does not tarnish the name of God; we are being driven by the Word of the Lord. This continues until a time. “But when the perfect comes, the partial will be done away” (1 Cor. 13:10).

When all the promises, prophecies and the will of God concerning mankind are fulfilled including the one concerning the harlot that sits on many waters, perfection comes. At that time there will no longer be a need for Christ to lead His believers through the Spirit and His means. We will no longer have the need to delve into the Word, for we shall forever be in the presence of God. Many have misconstrued the meaning of the “perfect” and the “partial.” They who continue to do so will pay the price, since they forfeited the aid of the Christ who sets the course of His people. For they have failed to understand the following. “From the descendants of this man (David), according to promise, God has brought to Israel a Savior, Jesus” (Acts 13:23).