The resolution to do all that the Lord has said is a very strong quality. It gives the determination to listen to the Lord and adhere to His words. A person with it fears moving away from it. He knows there is life and security by it. The proof of it is the works of the Lord for him. He has seen that His ways and thoughts are indeed wonderful; he found much joy and fruit through them. He has had numerous experiences with Him and thus, has built up reverence in his heart for Him. He is aware that if he confines himself to such reverence, he will not be moved, shaken or destroyed. The resolution is one that existed and it only does good to adopt it. “Then Moses came and recounted to the people all the words of the LORD and all the ordinances; and all the people answered with one voice and said, ‘All the words which the LORD has spoken we will do!’” (Exod. 24:3).

When a believer comes to the point where he commits himself to do all the words of the Lord, he had made the choice to not ignore the Lord. So, what is our choice? The choice we make determines the direction the Lord is willing to lead us; it decides His thoughts for us. Our destiny is determined. We may not know it full well, but the Lord has planned it and will execute it to perfection. We see it unfolding as we go on through different stages and situations in life; we realize we have been blessed. Hearing Moses speak those words Israel made the right choice. They did not seek an alternative having witnessed the Lord’s kindness. It is the Lord’s working ways in our life that helps us make the choice. And it first begins with believing His Word. Thinking sensibly we realize that everything we do in life is by faith. So, hearing His Word should naturally include faith. Then, we witness His kindness that leads to commit ourselves to do all His words. 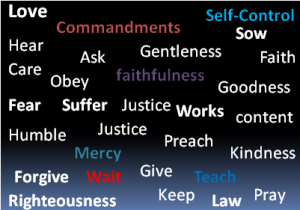 Whether or not we hold on to the commitment is another matter. If we do not hold on to it, we have regressed to our former way of life; faith was never a binding factor for it. Our regress is not by the Lord quitting working for us, but because we took His kindness for granted. Then, He will stop working for us. Israel went back on the choice they made; they left their commitment. It is absolutely possible in anyone’s case. When various thoughts and emotions of the flesh take over, one becomes insensitive toward all that the Lord has done for him. But, what if we hold on to our choice? The unwrapping of God’s intimacy will take place. There will be no end to the things He does and the heights He takes us. By continuing in our commitment, we do not have to worry going back on it; going back remains a matter whose existence is unknown.

Committing to do all the Lord has said has a reward. “So the LORD gave Israel all the land which He had sworn to give to their fathers, and they possessed it and lived in it” (Josh. 21:43). Israel’s commitment with God saw the fulfillment of His promises to them. The unbelieving Israelites who rebelled and sinned against Him did not see it. They confessed commitment with their mouth, but in their hearts were stubborn and indifferent. They desired that which God did not plan for them. They chose that which did not support a relationship with Him. He who promised and delivered to the Israel that kept the commitment also makes promises and delivers them to us for the commitment we make with Him.

It is to our benefit that we make an oath to keep the Lord’s words. Once we do it with our hearts by faith He helps us fulfill it. But what if one fails in doing it at some point or what if he or she becomes spiritually inept for it? The Lord has a plan for it too. He knows how to bring us back to Him. “Then Hezekiah king of Judah sent to the king of Assyria at Lachish, saying, ‘I have done wrong. Withdraw from me; whatever you impose on me I will bear.’ So the king of Assyria required of Hezekiah king of Judah three hundred talents of silver and thirty talents of gold” (2 Kings 18:14). God did a favor to Hezekiah and Judah. By giving them the consequences of their sin He gave them understanding. Although Hezekiah tarried in responding to the Lord’s warnings, he realized their sin when faced with consequences. He had in him the heart that reminded him of the commitment he made to the Lord by faith. This mind the unbelieving Israel did not have.

However, we do not have to tarry and face the consequences of our failure in keeping the commitment, if we apply the following principle. “A rebuke goes deeper into one who has understanding than a hundred blows into a fool” (Prov. 17:10). The Lord God rebukes us before bringing on us the consequences of our sin. Consequences of sin appear when our hearts are no longer responding to His warnings. They are a strong jolt to shake us up and bring into us the understanding we lost through sin. The one who grasps rebuke and returns to his commitment does not face consequences. A rebuke from the Lord comes when we are still with understanding. He who does not make use of his understanding neglects it. Hence, a rebuke goes deeper into one who has understanding. By using his wisdom he deliberately allows the rebuke to seep into his heart and escapes the consequences of sin. And God said, “Again, when a wicked man turns away from his wickedness which he has committed and practices justice and righteousness, he will save his life” (Ezek. 18:27).

Our commitment with the Lord to do all His words reflects two things – justice and righteousness. There are two staggering benefits to it.

1. We realize Jesus Christ to the fullest. “And Jesus came up and spoke to them, saying, ‘All authority has been given to Me in heaven and on earth’” (Matt. 28:18). We draw from His authority. We see that it is by His authority that our going forward in all matters is possible. Whether people or circumstances, He controls them that our way is not obstructed or is cleared when obstructed. We become habituated to lean on Him for everything so that our burdens are lightened.

2. We receive a fantastic gift. For this reason, Jesus appeared in the flesh, died on the cross and rose up from the grave. “After eight days His disciples were again inside, and Thomas with them. Jesus came, the doors having been shut, and stood in their midst and said, ‘Peace be with you’” (John 20:26). The peace of God that is beyond any understanding will keep us confident in life. As we keep His words, He sends His peace into us so that we are free from all fears, anxieties and presumptions. Though we may not be able to unfold everything that appears before us, His peace will keep us unmoved. We know He will take care of us. There is nothing on this earth comparable to God’s peace; nothing gives the same effect as it.