The passion to give to the Lord in a manner desirable to Him comes from within us. There is no alternative to it. It should not be by the flesh, by the means of fleshly deeds or by the glory we seek. As believers we must understand that to give to the Lord is not of a mere command, but of a command that calls our deep affection for Him. The love we have for Him, our intimacy with Him and our gratitude toward Him are the only reasons we can unequivocally give to Him. There are ambiguous opinions and fears concerning giving to Him all of which are due to the provocations of the flesh. But giving to the Lord, if performed in its true sense, does not relate to anyone’s wisdom or thinking, but to the determination that has come forth from us. Such determination is brought forth only by that which the Lord has done for and placed in us. An excerpt to it is the following.  “Everyone whose heart stirred him and everyone whose spirit moved him came and brought the LORD’S contribution for the work of the tent of meeting and for all its service and for the holy garments” (Exod. 35:21).

It is true that no matter how much we give to the Lord, it does not measure up to Him. Yet, it satisfies and 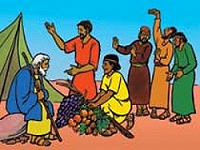 pleases Him to see His children practice His command; not only practice it, but exercise the quality He desires from them. The command should stir and move each one’s heart in order for them to willfully give. Unless one possesses a heart that embraces it or has been transformed to embrace it, he or she cannot truly practice giving. True giving does not have the shadows of sin. It is from perfection, one to which the Lord has brought us to. A person truly wishing to give turns his whole self to the purpose and desire of the Lord.

No man can stir or move another man’s heart to give to the Lord, except his passion for Him. Such passion can be quantified by the following. “Now Ahimaaz the son of Zadok said once more to Joab, ‘but whatever happens, please let me also run after the Cushite.’ And Joab said, ‘Why would you run, my son, since you will have no reward for going?” (2 Sam. 18:22). Our giving will always be free from ulterior motives when it is by great passion. We do not expect anything in return. Yet, there will be rewards. But before we can think of them, let us consider what makes the basis for a genuine giving.

Therefore, as those with the right basis, we can always be with the hearts and spirits that are open for the Lord’s command to stir us.